Special Relativity is Not Needed

There is a very good explanation of the development of the Special Relativity (SR) equation given in the reference [1] . Figures Figure 1 and Figure 2 show the models that are used by Robert Johnston. Quoting Johnston: 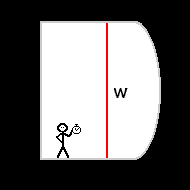 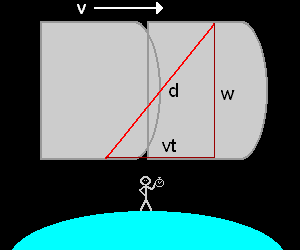 Observer A is moving with the space craft and the model shows that he sees the light moving straight up. Observer B is on the earth and observes the light moving to the right at a 45 degree angle. Since they each see a different image, a transformation is needed. But wait! The two images are wrong.

In Figure Figure 1 , observer A sees the laser beam moving straight up and is not aware that he is moving. There is no arrow showing the velocity v. He is not smart enough to look out the window and see the earth moving by. Even so, if the light beam is actually moving straight up he should know that the spacecraft is not moving relative to the laser beam that he sees, even though he sees the earth moving.

It could help if we had a better understanding of how we see the light beam. So here is a simple experiment.

Shine a red laser light on the wall. Do you see the red spot? Yes, but do you see the red beam going from the laser pointer to the wall? No? It's true, you can't see a photon moving in space unless it reflects off of something and then the reflection must hit your eye.

Image of the Red Dot

In a very short interval of time the laser light (photons) will hit many hair spray particles. These photons will scatter in all directions sending similar images in all directions. One of the images reaches observer A and he sees the streams of red hair spray particles. If Observer A sees the the stream of particles shown in Figure Figure 1 , then observer B will see the same image.

So what should each observer see?

Figure Figure 3 shows what observer A could see if the space craft is moving at a high speed.

The spacecraft is shown when the first photon burst has reached the ceiling. The last one emitted is just above the floor. If observer A sees the dotted image in Figure Figure 3 , observer B will see a similar image.

There is one event. The red laser photons scattering from the hairspray particles. It will send nearly identical images of the particles to observer A and B. If observer A and B see the same image, then there is no translation needed. The speed of an object does not change the scattered image of the object. Special relativity equations solve a problem that does not exist. It does not cause time dilation, nor length contraction, nor mass increase.