The central mystery of Quantum Mechanics comes from the results of the double slit experiment. Scientists conclude that light is both a wave and a particle. This is called Wave/Particle Duality and it is difficult to explain. How can light be both at the same time? Jim Al-Kalili released an excellent video explaing the double slit experiment and its problems. [1]] This paper uses the Particle Model to explain each part of the experiment.

Light and the Interference Pattern 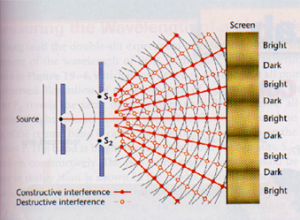 When sending monochromatic light through a double slit screen, the light arrives at the target screen showing a pattern of bright vertical bars separated by dark bars. This interference pattern is easily explained using the addition and subtraction of sine waves. That's just math, not physics.

Although Al-Kalili calls them atoms, it seems more likely that an electron gun is used to send streams of electrons to the double slit screen. Since electrons are particles, the result on the target screen should be two bars separated by one dark bar. Instead there is an interference pattern on the target screen. Individual particles should not do that. The electron is behaving like a wave?

Figure 2: G2 Gravity bends the G1 as it passes though the slits

G2 gravity can change the velocity and direction of a G1 particle as it moves. There is a G2 gravity field around all objects including the double slit screen. Since the G1 replaces light and the electron, it doesn't matter what is being sent through the slit, they will bend according to the G2 force field around the screen.