Difference between revisions of "NLP++"

NLP++ is a computer programming language for natural language processing created by Amnon Meyers and David de Hilster in 1998. It operates on an input text via multiple passes that elaborate a best-first parse tree. It can access and update a hierarchical knowledge base management system (KBMS) called Conceptual Grammar (CG). NLP++ and CG deploy with an Integrated Development Environment (IDE) called VisualText, which supports rapid development of text analyzers. NLP++ is the only computer language that is exclusively dedicated to natural language processing.

NLP++ is a computer language dedicated to building natural language text analyzers. It allows programmers to capture and apply linguistic and world knowledge, emulating processes by which humans read and understand text. NLP++ combines bottom up, island-driven, recursive grammar, and other methods in a multi-pass architecture sequential processing in conjunction with a dynamic hierarchical knowledge base called the Conceptual Grammar. NLP++ can dynamically build knowledge and use stored knowledge in order to aid in the task of understanding written text. It's scope in processing text runs from simple syntactic processing and matching to full-blown natural language understanding. NLP++ is a language, not a toolkit so all analyzers must be created from scratch for each application.

NLP++ is a computer language that takes text, breaks it down into tokens, builds up those tokens into syntactic trees, and builds and uses knowledge stored in the conceptual grammar. The language includes functions, rules, local variables specific to its internal representations of text and knowledge.

Variables are written with a single letter and a string name. There are special variable types in NLP++ that are used in specific contexts. 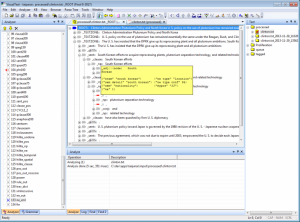 In the mid 1990s, the two moved to the Aritifical Intelligence Group at Space Park at TRW where the two continued their collaboration, with de Hilster's work inspiring the creation of a new company ISearch which electronically processed resumes. In 1997, de Hilster was hired by ISearch to move their text processing system to the C language. 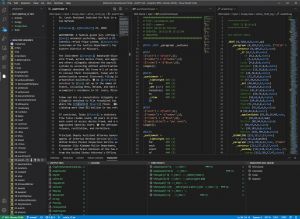 VisualText IDE is now ported to VSCode as a language extension which runs cross platform. This is now considered to be the current version of the IDE and will continue to be developed and enhanced. It is planned to be officially released as a Microsoft VSCode Language Extension sometime in the first quarter of 2021. It is currently available as a beta IDE in the VisualText repository on GitHub.